FAO advice to citizens on how to avoid bad eating habits 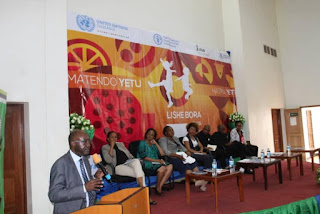 The World Food and Agriculture Organization (FAO) has urged all citizens to eat healthy foods and break all bad eating habits which cause negative impact on human health which includes obesity, high blood pressure, high cholesterol, heart disease, stroke, diabetes, osteoporosis and so on.

During the discussion, Mr. Kafeero explained how during these modern day of globalization and urbanization, most people have changed their eating patterns and habits especially in urban populations where many people find that they do not have time to prepare meals at home, thus leading them to buy fast food at restaurants and on the street which in fact lack the essential nutrients for making a balanced diet.

He added that health professionals have proven that poor diets are the main cause of many non-communicable diseases such as diabetes, hypertension, heart disease and cancer. Therefore, given these challenges we need to change our habits to achieve the goal of a world without hunger by 2030, we need to eat a full balanced diet meal, exercise and ensure the hygiene and safety of the environment around us.

Another speaker was Deputy Minister for  Health, Community Development, Gender, Elderly and Children, Dr. Faustine Ndugulile who noted that the situation is still challenging for the most of citizens in fighting Malnutrition whereby he advised mothers to make sure they breastfeed properly their babies and also follow a strict diet plan to avoid large costs which will be involved later in fighting the malnutrition for their babies.

“The cost of malnutrition outweighs the cost of a balance diet.” Said Dr. Ndungulile.

He went on to say that having a food security only will not protect us from those malnutrition diseases if our focus will not change especially on the intake of balanced diet foods, caring for our own health and environment which surrounds us, citing regions such as Njombe, Iringa and Rukwa which produce large amount of food but the number of children with malnutrition is bigger than those regions that do not produce much, So he advised citizens to put emphasis and strive for a balanced diet.

On the other side, the Deputy Minister for Agriculture, Hon. Omary Mgumba said that the country has a food security but people's attitude towards food is a challenge, because many citizens are dominated by cultural attitudes where one tribe believes one diet is more nutritious than others. Parents also think of traditional foods such as legumes and other foods that are for poor people, while they believe that foods like Chips, Pizza, Goat Milk and Burger are the right foods for children while even natural foods contain more nutrients.

About the World Food Day and Panel Discussion!
The World Food Day is celebrated each year on 16 October to promote worldwide awareness and action for elimination of hunger, food insecurity and malnutrition. Events are organized in over 130 countries across the world, making it one of the most celebrated days of the UN calendar.

The 2019 theme for WFD is “Our actions are our future. Healthy diets for a #ZeroHunger world.”

ZERO HUNGER is the second of the 17 Sustainable Development Goals (SDGs) of the United Nations, supported by all UN organizations. However, Zero Hunger does not only mean the absence of hunger but also mean all forms of malnutrition through the promotion of healthy diets.

This year WFD will call for action to get back on track towards achieving Zero Hunger by 2030 with healthy diets in mind. It will show how, despite rising hunger figures, it is still possible to reach this global goal if we join forces across sectors and professions, nations and continents. This means adopting a Zero Hunger and healthy diets lifestyles through the choices and actions we make on a daily basis to build a better world together.